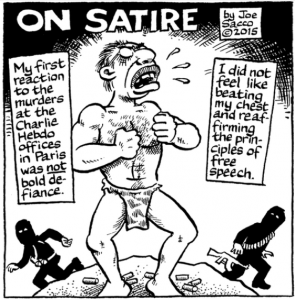 2015 has announced itself right away as a year in which violence is going to force us to think hard about race, gender, religion, and culture.  In this, it is not unusual.  But unlike other such years in recent memory, 2015 seems to be announcing itself to an audience/participant group (that’s us) that is not going to resist thinking with every ounce of will it can muster.  Reason for optimism, in my world.

This post is short — all my posts will be short, most likely — but I leave you with a link to one of the best responses I have seen to the Charlie Hebdo murders in Paris.  I recommend it to anyone seeking to ask questions about this tragedy from a place that honors grief and freedom and the widest possible range of human/cultural self-expression and self-actualization.